A few months ago, more than a year ago, I realized that Nimue, although having an Arthurian name, had not yet created embroidery subjects from the Arturian Legend. What?
It seemed incredible that after more than 17 years of being called Nimue(The Lady of the Lake),nothing, no character, transmitted this culture that is the breeding ground of my inspiration.
An opportunity would allow me to embark on the realization of this Arthurian pantheon: an invitation to Moscow, as guest of honor of a fair art of the thread – crafts, Formula Rukodiela in February 2020.
The first cross-stitch subjects were Guinevere,then Arthur,the Royal Couple.
Now it is the turn of the beings of the Other World, the Enchanter and Enchantress: Merlin and Viviane.

Viviane, The Lady of the Lake: Episode 3 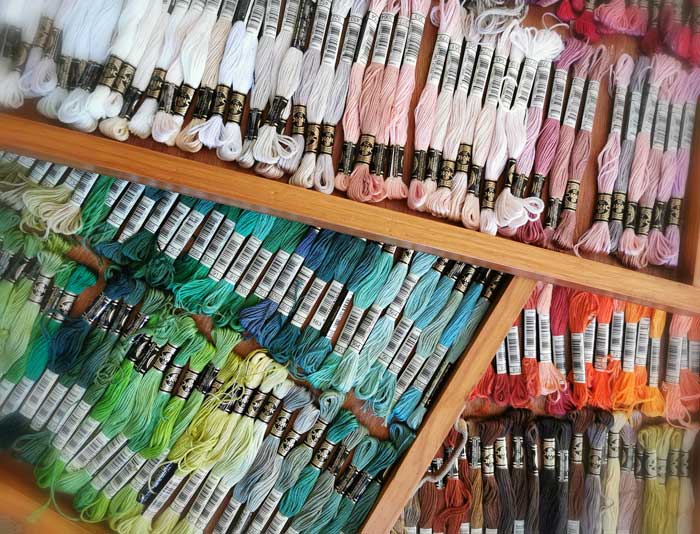 The Palette... Stitch by Stitch

A counted cross-stitch embroidery has little to do with a painting, at least as far as its color palette is concerned.
For a painter, some embroiderer choices will seem outliers. This comes from the fact that in a painting one has at his disposal millions of colors. They mix endlessly and offer a multitude of nuances.
In embroidery this is not possible.

For a painter, some embroiderer choices will seem outliers.

But for all that the embroidery must give the illusion that it is indeed the same image.
From one million colors the palette has been reduced to 20, 30, 40 colors depending on the size of the pattern. This implies having a synthetic look at the work. This means making drastic choices and like a funnel there are only a few colors left and each of them must be hyper efficient and fair.
At stake is the final cost for the embroiderer.
That’s why a color should only be added:
The eye that creates must be able to synthesize and create the illusion but to the economy: Magic! 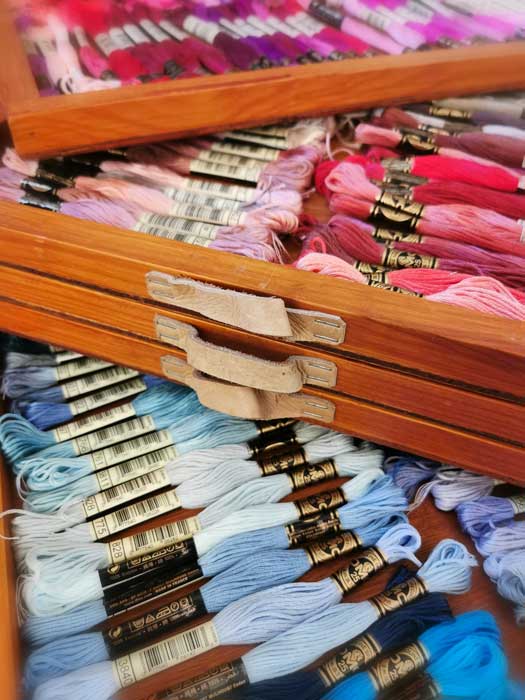 When I create the diagram, that is, when I place each stitch, and therefore each color of thread, I first go to instinct with what “I know” of those chosen colors. I trust myself.

The eye that creates must be able to synthesize and create the illusion but to the economy: Magic!

1- When I say “I know” about colors, it takes into account several elements at once:
2- Once these points are placed, on an area more or less important depending on the complexity of the pattern, I will take a step back. I reduce the image and see if the overall effect is appropriate, if the light areas for example, have the right proportion. So I increase or reduce the space of certain colors without worrying about the image but the desired effect.
3- Finally I return in detail on each space of the grid by nuaning: a little lighter here, a little more yellow there, a little darker here, pinker, more intense etc. etc. I’m going to work on it over and over again until it seems “rich” enough. I’m looking at every plot.
4- And by embroidering I change points over and over again the time of progression. There’s no end to it. I re-adjust and moderate as I go, depending on what’s going on. That’s why I can delegate and “give to embroider” because basically what I like is this meticulous work of writing symbols,point after point.
You have to be demanding without getting lost. The goal is excellence, grace and beauty. It can’t be less than that. 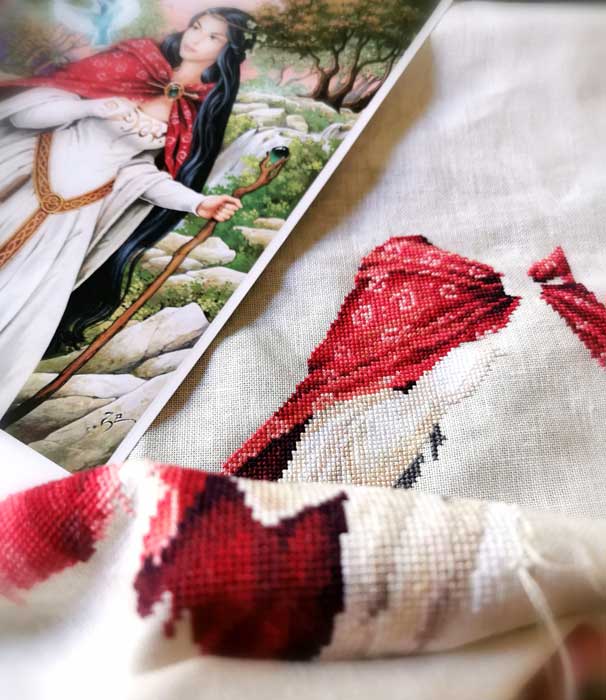 The goal is excellence, grace and beauty. It can't be less than that.

I like to imagine that what I have in my hands is alive and that this form in the making gives itself the right to grow and beautify. With as time goes the canvas that feeds and gorges itself on multicolor satin threads with effects all more moving than the other.
The intimate progression with the work is the most precious thing, because it reveals itself to us, sometimes in spite of us, it passes through us and exceeds us.

So I tell you: a designer aspires to end up in the hands of are work rather than the other way around.

She then becomes her puppet but that is, and you will not contradict me, for the greater good of all…

See you for the sequel: Viviane Episode 4…

Viviane, The Lady of the Lake, by Nimuo after an illustration by Elph’s Zephir.

Don’t hesitate to leave your comments below! 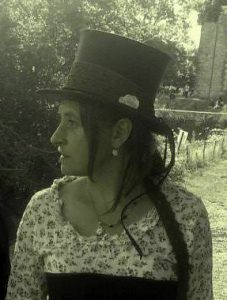 Welcome to the story of Nimue’s Creations. Here I share with you the How and Why of these creations. 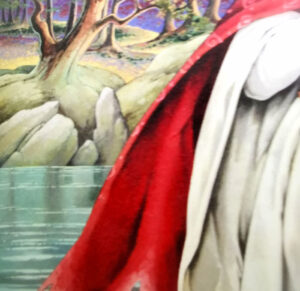 Viviane, The Lady of the Lake: episode 6

The original work… Most embroidery creators are painters or graphic designers. They create an original work and transform it into a diagram. Many do not

Viviane, The Lady of the Lake: Episode 1

The cape… Do, undo, redo I’m pretty confident in my red/pink colors. I love my basic color which I find both modern and bright. It 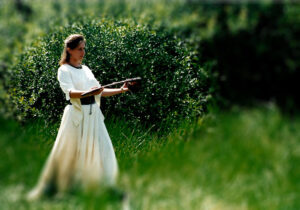 Viviane, The Lady of the Lake: episode 5

At full speed… This time I enter a space where I can breathe. The following part, that is, the right of Viviane’s skirt is and 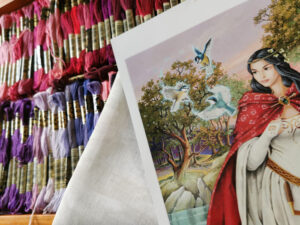 Viviane, The Lady of the Lake

prologue When an illustration inspires me, that is, it lends itself to an interpretation in embroidery, and my little embroidery heart awakens, then I bug 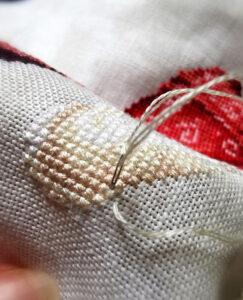 Viviane, The Lady of the Lake: Episode 2

palette… Where are the white people? The cape being embroidered I tackle a dimension of the palette really crucial: Skin colors. Again I choose two 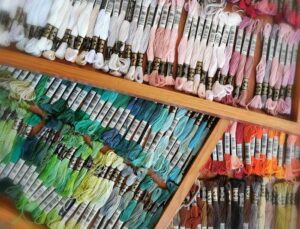 Viviane, The Lady of the Lake: Episode 3

The Palette… Stitch by Stitch A counted cross-stitch embroidery has little to do with a painting, at least as far as its color palette is